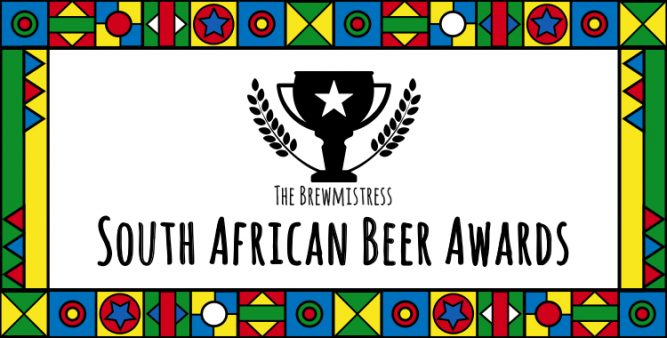 The winners of the possibly annual Brewmistress South African Beer Awards were announced last night in a beer-studded event at Afro Caribbean Brewing Company. Inspired by the people’s choice vote at the South African National Beer Trophy, I asked you, the beer loving public, to vote for all of your beery favourites. And you voted in your, well, dozens. Dozens! There were almost 300 votes, but I discarded quite a few due to their obvious bias – there were lots where someone had either voted for the same brewery in every category (yes, including best liquor store and biggest news) or had only voted in one category. The idea was to give a fairly rounded view of what the beer drinkers enjoyed this year, not to see who has the most loyal Facebook fans! In the end there were 213 valid votes. And here are the winners:

There were two winners in this category so no second place. This was for a brewery that had emerged in the past year.

For a brewery with a great all-round offering including food, beer, atmosphere.

Honourable mention has to go to the Tops chain, who received votes for individual stores around the country, though one branch stood out above the rest…

This was the tightest race of any category and votes had to be recounted thrice – in the end there was just one vote in it… Beerhouse Fourways took the fourth spot.

Of all the categories, this was the one with the clearest winner, taking almost 50% of the votes. There was no third place as two fests tied for second, but honourable mention goes to Woodstock Winter Beer Festival – small, new and very popular.

Another landslide here, with brewery buyouts hogging the headlines in 2017.

1st: Heineken takeovers, or what one voter referred to as “Heineken’s recent shopping spree”.
2nd: Devil’s Peak, in general. So much news has come out of this brewery in 2017 (new premises, so many new beers, collabs, in-flight brews…) their spot on the top news list is well earned.
3rd: Hopgate

Thanks to the person who sent a vote my way (and it wasn’t even my mum!) and an honourable mention to Mitchell’s who just missed out on a spot in the top three.

There was a very clear – and in my opinion highly deserving – winner in this category. It was also great to see one of the smaller producers in the top three.

I have to admit, I confused people a little with this category. I originally called it “The Black Label Award for Beer of The Year”, which was both a jibe at Black Label winning best beer at the SAN Beer Trophy and also a dig at the fact that SAB refers to it as the most awarded beer in Africa – or words to that effect, which I’ve always assumed refers to the Black Label Awards for the Best Black Label. Anyway, this confused people (much as this paragraph is, I imagine) and garnered responses like “not on your life”, “I don’t drink that shit”, “I still enjoy it” and “you can’t change mindsets overnight”. The majority did get though, that this was the category where you vote for the beer of the year, 2017. There were dozens of nominations – just showing what a vast range of great beers we have these days. We ended up with a five-way tie, which happily includes a Jo’burg beer alongside some Cape favourites:

So congratulations to all the winners and big thanks to everyone who voted. All that’s left is to randomly choose winners of our lucky draw prizes, sponsored by Loxton Lager and Beerhouse Fourways.

Winner of the Beerhouse Beer O’clock tasting tray is Jaco – no surname supplied but I do have an email address for him and am assuming his surname is Roodt.

And the second winner of a case of Loxton Lager, plus glasses is…Murray Slater (good job he didn’t win the Beerhouse prize – that would be awkward!).

Big thanks to Thandi Guilherme, AKA Craft Geek for designing a slider for the awards. To everyone else, merry Beermas, thanks for reading the blog…oh, and while we’re talking about voting, please consider throwing a vote my way in the 2017 SA Blog Awards. Thanks!