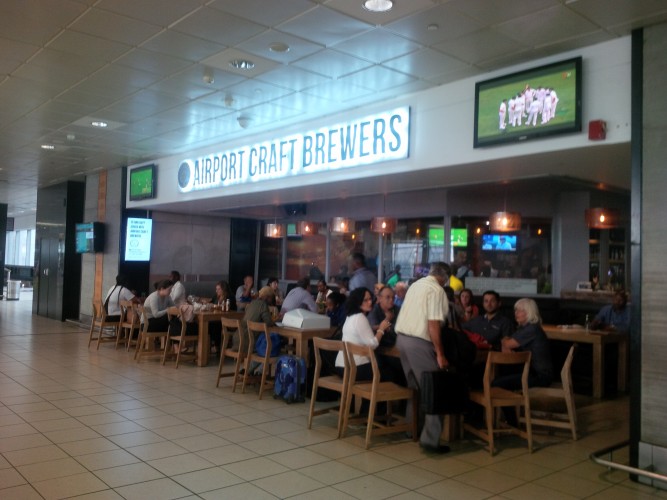 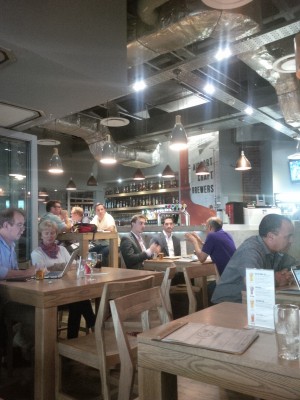 If you’ve flown out of OR Tambo International Airport on a domestic flight lately, you might have noticed an intriguing new addition to the departure lounge’s food and beverage offering – Airport Craft Brewers.

The brains behind this bar really know what people want when they’re waiting for a flight – a cold beer and a place to charge your cell phone/plug in your laptop. There are six beers on tap plus a cider and while I didn’t pick up any off-notes except for some diacetyl in the cider, I wasn’t wowed by any of the beers. Considering the location of the bar, I imagine they’re designed with mass appeal in mind as none had particularly bold flavours. But, with the exception of the weiss and the porter, the beers were pretty samey. You have to remember which space on the tasting tray you took each beer from or you could very easily lose track of what’s what. For me the Weizen – which appeared to be a kristalweizen – was by far the best beer, with plenty of banana on the aroma. The others were refreshing enough, but phrases like “perfectly inoffensive” and “quite unremarkable” made it into my notes. I would love to see at least one ‘wow beer’ on the menu for the beer hunters among us, alongside those appealing to a wider audience. 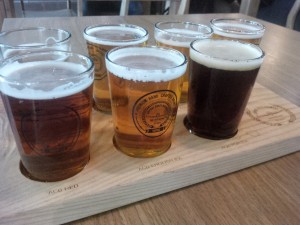 The more observant drinker will quickly notice that there is no brewery here – but there is a range of ‘house’ beers on tap – so where are they coming from? I haven’t been able to officially confirm, but I’m told the beers are currently being brewed at Swagga, based south of Johannesburg. It seems that Airport Craft Brewers is planning something though, perhaps an actual brewery within the airport. 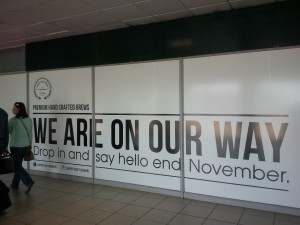 You’ve probably had more than one pint of Kilkenny at the Keg & Aviator while waiting for a flight at OR Tambo. Well you won’t be doing that again as the pub is no longer there. Its facade is adorned with ads for Airport Craft Brewers, with signs promising that the larger bar – accessible before you head through airport security – will open at the end of November.

A brewpub in an airport is a brilliant idea – let’s hope they pull it off, for the sake of every delayed passenger whose journey will be made more bearable with a decent pint of beer in hand. Watch this space for updates, or share any updates you might have in the comments below.