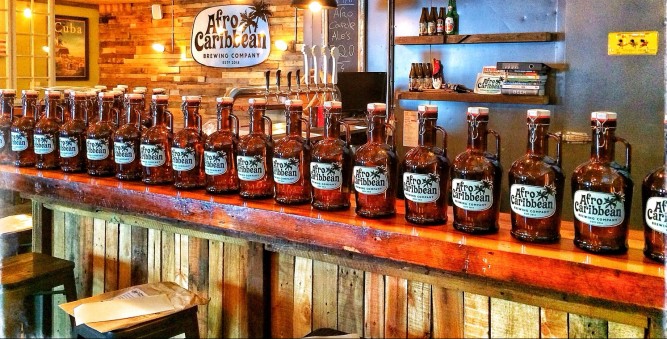 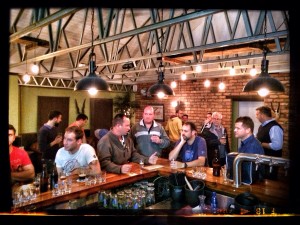 See those people having fun? That could be you!

You know that piss-up in a brewery you’ve always wanted to see if you can organise? Well here’s your chance. Just in case you’ve been hiding under a WiFi-free rock for the past few months, let me tell you that Banana Jam Cafe, that bastion of the Cape craft beer scene, has opened a microbrewery on the newly-built first floor. Afro Caribbean Brewing Company takes its decor inspiration from a US brewpub and its beer inspiration from the madcap brain of head brewer/owner Greg Casey. The flagship beers include a coconut IPA and bacon chili ale, which are poured alongside Hopsession (hoppy pale ale) and the British Virgin Islands Ale (lovingly known as  ACBC BVI).

Now here’s the bad news – at the moment, the brewpub is only open for special events – homebrew club meetings, rugby matches and the brand new #FirstBeerWednesdays initiative. But here’s the good news – you can rent the brewpub to host your birthday/leaving/retirement/hoorah for the weekend party.

If you’re looking for a sit-down affair, the bar can seat 25 – 35 people spread out on chairs around the hefty dining table, bar stools and a couple of coveted spots on the leather couch. For larger groups who don’t mind standing to sip on their beers and nibble on snacks, up to 60 can fit comfortably. 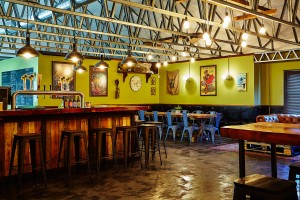 Beer obviously plays a major role, but you’ll find the usual soft drinks spirits and a good wine list on offer, plus the option of a welcome cocktail (ask about their experimental beer cocktails for something different). Food-wise, think sharing platters featuring piles of pulled pork, pineapple ribs, succulent sliders and crispy calamari.

Events can be tailored to your needs – whether you want a brewery tour and beer tasting, a cool place to screen a movie, a projector for PowerPoint presentations or even, with enough notice, the chance to join Greg for a brew which you can later enjoy at your function. The venue is available seven nights a week and Monday to Saturday during the day.

To enquire or book, email bookings@bananajamcafe.co.za.