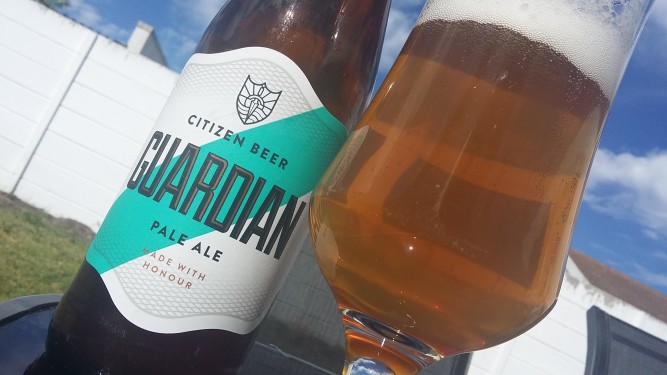 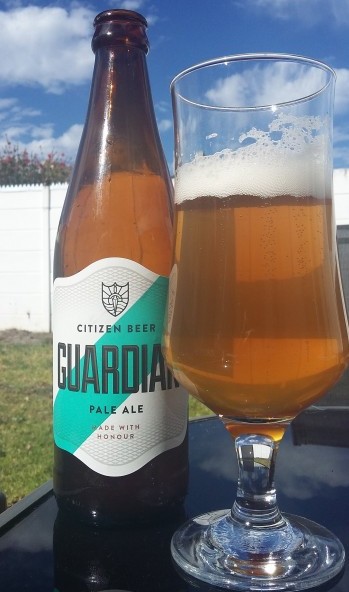 I have a feeling about this beer. I have a sneaking suspicion it’s going to fly off the shelves this summer. And I’ll tell you why. It’s because I’m going to buy it all.

OK, I might have lied a little, but Guardian is a perfect summer quaffer, and it is going to sell well. It’s a refreshing pale ale, light in body, fairly high in carbonation and full of flavour. Plus it has a big sack of hops in it (a combination of American, Australian and English vareties). The beer was inspired by a trip to Australia. Citizen’s founder, Gary Pnematicatos , found himself ordering a round in an Aussie bar only to discover he’s swigged half his beer before he got the rest of the drinks back to the table. He wanted to make something that moreish, that refreshing – and I think he has succeeded.

The beer has a pleasant haze – pleasant because you can basically see the dry-hopping before you smell it. Nose-wise, it’s deliciously dank, with a hint of biscuity malt playing a supporting role. There’s malt flavour here too, but the after-taste is all hop (mostly citrus, notably grapefruit). It’s a flavour that lasts and lasts; I wish the same could be said for the beer. Guardian goes down quicker than Donald Trump’s approval rating any time he talks about women. TIP: buy more than one four-pack of this – assuming you’re sharing with at least one other person, the first pack will disappear before you have chance to settle into your pool lounger/hammock/towel on the lawn. You’ll be pleased to know that unlike Citizen’s last release, Pacifist, Guardian is a permanent addition to the line-up.

My only criticism is that I would like just a touch more body. It’s a little too light, mouthfeel-wise, for my tastes, but then that is part of what makes this a super sipper and I suspect the majority of those who buy it will disagree with me here.

The finish is so crisp and clean it’s like a palate-cleanser, getting you ready for that next sip. And then the next. And suddenly you’re sending your husband out to the liquor store to stock up for summer…