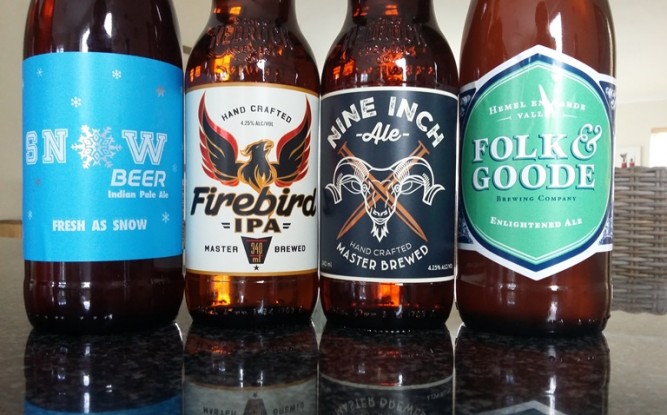 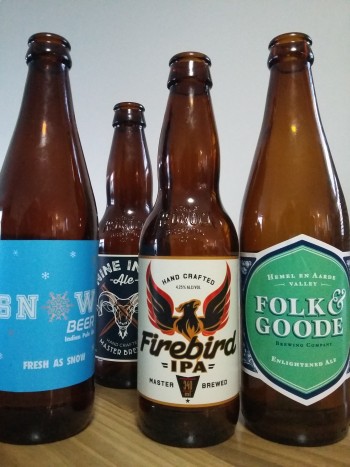 It occurred to me the other day that I have become very unadventurous with my beer choices. When it comes to buying bottled beers I tend to stick to the same few brands, largely because I got fed up of tipping crap beer down my drain. This has to stop. Both the crap beer and my refusal to give anything new a chance. There are so many new breweries out there and it’s just not fair to ignore them simply because of bad past experiences. So last week I bought four beers I’ve never had before. Here’s what I thought of them.

I had no idea what kind of ale this was – there is zero info at all on the label. To be honest, if it didn’t state on the bottle, my guess would have been amber lager. My notes included phrases like “virtually no aroma”, “some toffee but no hop” and “no complexity at all”. So imagine my surprise when I read the website blurb. “this ale will quite literally blow you away with its full flavoured robustness”. It did not. In fact, I thought that if beer-flavoured water became a thing, this would do well in that category. It’s perfectly inoffensive – no off-flavours – but is also perfectly uninspiring. And I suspect it will sell quite well…(although probably not to beer geeks).

Speaking of labels that are lacking info, the blurb on Folk & Goode’s debut beer was baffling and totally free of useful details. “A black sheep with blue eyes”, it states – is this a way of saying “we’re not entirely sure what style this beer is”!? “Undeniably cloudy and crisp”, the label promises and it did indeed live up to half of that – it sure is cloudy. There was a weird earthy aroma that wasn’t altogether unpleasant but flavour-wise, the beer had a mouth-drying astringency that meant I couldn’t get through more than a few sips. 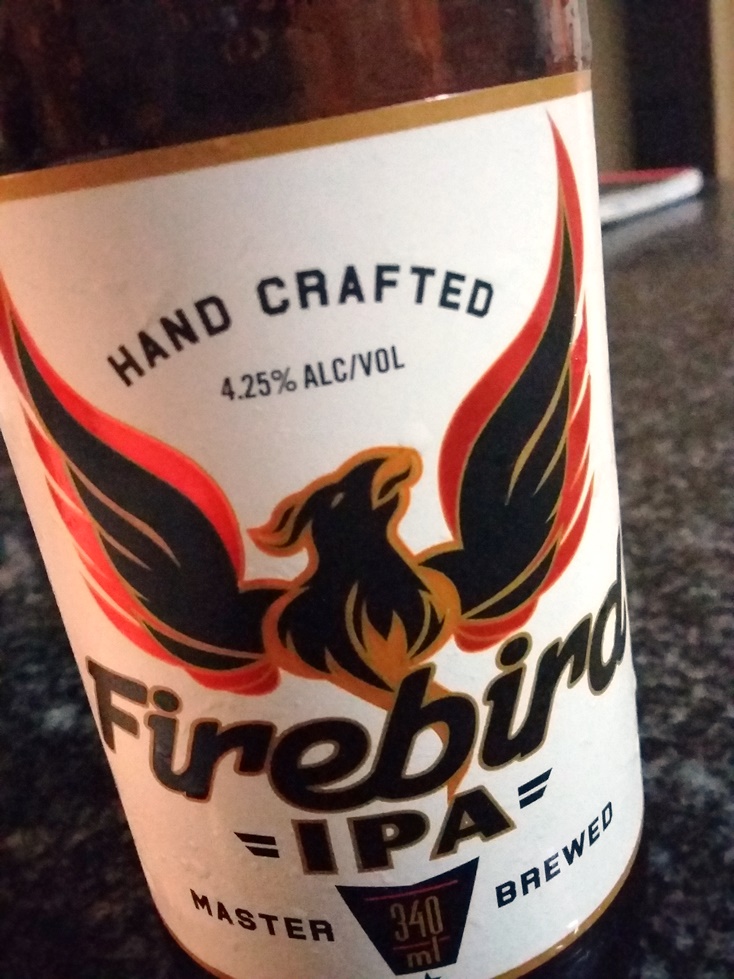 If I had a beer mantra I think it might be “don’t mess with my IPA”. I love IPA – American IPA in particular. I love the massive whiff of hops, I love bitter, bitter beers. And I rather like the ABV of an IPA as well. At 4.25% ABV, Firebird is low in alcohol even for an English IPA. There’s no indication as to whether it’s meant to be an English or American style IPA, and the absence of any hop aroma made it tough to hazard a guess. It’s a completely drinkable beer, make no mistake. Beautiful to look at, great lacing but absolutely nothing about it is remotely IPA-like. If you’re after a thirst-quenching braai beer that you don’t need to think about, grab a bottle of Firebird. If you fancy drinking an IPA, move along; this is not the beer you’re looking for…

Yes, the label says “Indian”, not India, which started alarm bells ringing for me. But in fact, it is a decent beer – there’s nothing off anyway. It’s a bit one dimensional and I might wager that it uses entirely SA hops, but there are pleasant passion fruit hop aromas and a solid lingering bitterness. No hop flavour to speak of and very little malt character, but we got through the bottle and even let a glass of it warm up to check for any underlying nasties – it passed the test. In-keeping with the trend, the label manages to give as little information as possible – including indeed, where this beer is brewed. Rumours of a northern suburbs garage abound – if anyone can confirm or deny, please get in touch.

So there you have it. Of the four, only one ended up down the drain, so that was a bonus. Would I buy the others again? Perhaps, to see if the recipes change and improve with time. But I’m glad I’ve ended the embargo on anything that isn’t CBC/Jack Black/Devil’s Peak et al. Let’s hope beer just keeps getting better…