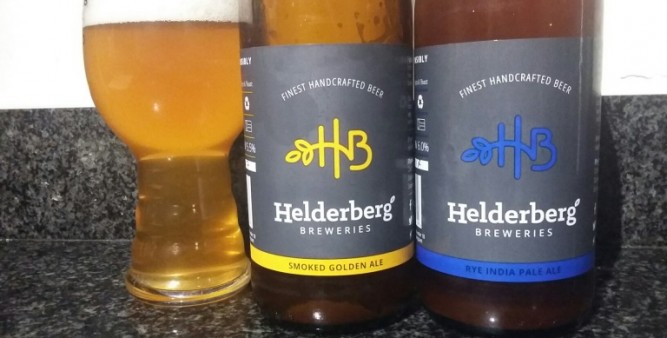 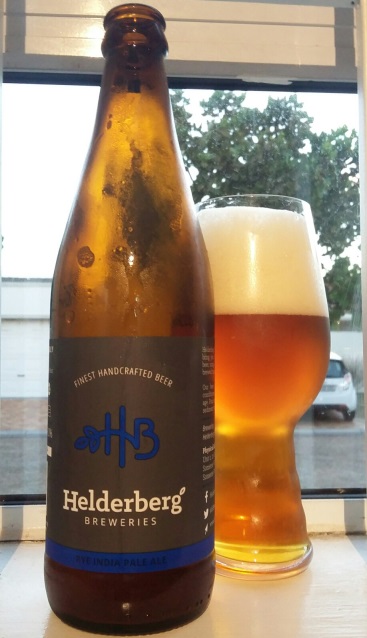 I never seem to find time to write up beer reviews these days. Finding time to taste the beers is one thing – getting around to putting them on the blog is another kettle of proverbial fish. So here is a double review for you – Helderberg Breweries Smoked Golden Ale and Rye IPA.

I have to say, the name “Smoked Golden Ale” set off alarm bells. A charcoal/smoke-like aroma/flavour can be a sign of chlorophenols and I was a little worried that the batch had gone wrong and the brewer just ran with it (it happens folks!) but in fact I got very little smoke character at all from this. I think there is perhaps just a kiss of smoked malt used in the grain bill (you know – the same way that Hansa uses a “kiss” of the Saaz hop). It’s a smart move here though – smoked malt can be a powerful ingredient and not everyone loves a beer that tastes like bacon. I can’t imagine why not, but people are weird like that.

I was a little concerned by the amount of sediment in the bottle, but was all-round very pleasantly surprised by the beer – it was impressively clear and flavour-wise, pretty clean. There’s a touch of pepper spice when you sniff, and lilacs in the background but otherwise it’s a very subtle brew. So subtle in fact that I had to keep going back to see what flavours I could find. It’s refreshing but a little muted and certainly lacks wow factor. Still a solid braai beer that you could get through a couple of while waiting for the flames to die down. (3/5)

On to the Rye IPA. I would have loved more hops on the nose here. I got a touch of peach, but of the tinned rather than fresh variety. There was a hint of red berries and stewed fruit plus an earthy, slightly spicy aroma from the rye. I think rye can be tricky to get right in a beer and while I admire the innovation (OK, not exactly a novel idea, but how many South African breweries can you think of that offer a rye beer?) I’m not sure Helderberg Breweries really nailed it.

It starts well when you take a swig – some pepper, the merest hint of toast and then a wave of toffee. There’s not a whole lot of hop flavour, but there is plenty of bitterness. Like a lot of bitterness, which combined with the characteristic dry notes that rye typically delivers make this an almost acrid brew – it gives that same sensation as chewing on orange peel. That said, I continued to drink it. It’s complex and with each sip I enjoyed the initial flavour – then that dry and bitter and borderline acrid wave crashes over the tongue and momentarily ruins it all, until you go back for another sip. (3/5)

I think with a few recipe tweaks, both of these show great promise and you can see that the team behind Helderberg Breweries has a genuine passion for beer. No lagers or boring blonde ales on the brew sheet. In fact, next up is a Sultana Wheat Ale, something I imagine none of us has had many of before…