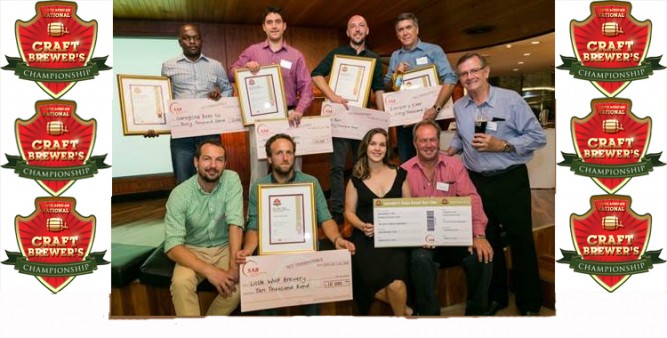 It’s an underdog story truer than the movie Dodgeball itself. In the third annual South African Craft Brewers Championship, a part-time brewer who shares his 120-litre system with 14 fellow beer lovers, beat more than 100 other South African beers from breweries large and small. Michael Howes topped this year’s list with his Rambunctious Rye, a beer that impressed judges for its originality, technical perfection and all-round awesome flavour.

Michael’s brewing label is Hopping Frog, one of 15 brands created at the Brewers’ Co-op in Woodstock, Cape Town. The Co-op launched in early 2015, a joint venture between 16 beer fans. Unable to afford the brewery of their dreams, the guys clubbed together to purchase a snazzy automated system that they imported from the States. Richard Andrew, the founder member of the Co-op admits that it’s been a greater success than he could have imagined. “It started much more modestly,” he admits. “But to be where we are just six months after getting our licence is fantastic. It’s sometimes difficult to come to group decisions, but when you look at people coming and enjoying beer from our 16 taps, what’s not to like?”

Michael cites his brewing inspiration as being Devil’s Peak. “King’s Blockhouse was the first IPA I ever tasted,” he says, admitting it’s “pretty unreal” that his Rye IPA stole the King’s crown this year. There are no plans to give up his day job as a programmer though. He’ll keep brewing in the evenings while juggling his day job and fatherhood and no doubt a new following of hopheads who will be demanding a taste of his Rambunctious Rye.

Michael wasn’t the only Co-op member to make the finalist list. Stefan Wiswedel made it into the top 10 ciders with two of his appley creations, Lethukuthula Tshabangu and Richard Andrew were ranked in the top 10 beers with their barley wine, the awesomely named Red Brick Shit House, and founder member Richard also placed with his Bitter Spring Cider.

Cape Town fared particularly well this year, with eight of the top 10 beers hailing from the Mother City (or the surrounding area). Second place was Valve IPA from Woodstock-based Riot Factory while Cape Brewing Company’s crisp and uber-drinkable pilsner took the third spot.

The top 10 had more than a meagre sprinkling of hops. If you ever hear someone saying that South Africans only drink light lager or that they don’t do hops, try slapping them about the head with a bag of Southern Passion. As well as a RyePA and an IPA in the top three, the top 10 counted two other IPAs as well as two beers over 8%. Here are all the winners: