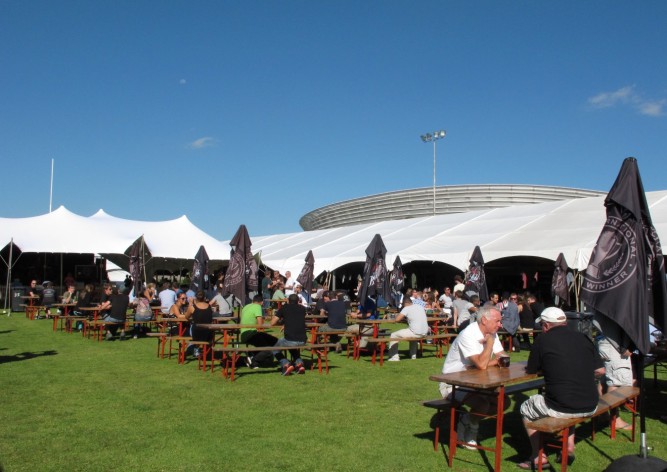 You’ll excuse the delay in posting this – it took me a while to recover from the third annual Cape Town Festival of Beer. This is not because I tried to mimic last year’s achievement of tasting every single beer on show, but more because this year, I actually worked at the festival. This is the second festival this year that saw me working rather than drinking (OK then, working as well as drinking). It’s a whole new world for a beer lover and it really opens your eyes as to just how hard it is to throw a hell of a good party.

I wasn’t pulling pints; in fact I was heading up the education department, offering hourly beer tasting tours to anyone keen to learn more about their pint (and willing to part with a bargainous R20). I was thrilled with the response; thrilled to find that people really do want to know what goes into their beer, why one ale is darker than another or which aromas are never acceptable in a beer (more about that in a later post). Those taking tours ranged from homebrewers who already knew their stuff to a group of wine drinking ladies who admittedly knew nothing about beer at all and whose aim was to find a brew that they liked.

A lot of heart and soul goes into brewing

Of course, it’s not every patron who cares what they’re downing and beer festivals

in South Africa still feature plenty of people who are more about the drinking than the appreciating. There’s nothing wrong with wanting to get drunk at a beer fest – it would be pretty weird if you didn’t – but next time you approach a beer vendor, branded pint glass outstretched, consider asking them a thing or two about their beers rather than just chugging and moving on. A lot of heart and soul goes into brewing – especially for some of the smaller producers who are often a one-man-show – and while brewers don’t mind dishing out free samples, they do mind if people don’t stop to sip and savour.

Back to the fest – it was, whether you’re there to get drunk or get educated, a rousing success. The food selection was better than ever, the entertainment just right, the clientele as wonderfully varied as the range of beer styles on offer and of course, there was BrewDog to taste (more on that later too). And not only was there soap in the toilets, but the toilet staff – who I’m sure we’ll all agree draw the shortest straw a beer fest can offer – were just about the cheeriest people in attendance.

Next year I’d like to see tasting glasses available alongside pint mugs, perhaps a Q&A session with a brewer or two and women’s t-shirts in sizes that will actually fit women who drink beer! And then, I believe we’ll be very close to our own collective beervana.