The evolution of the beer palate 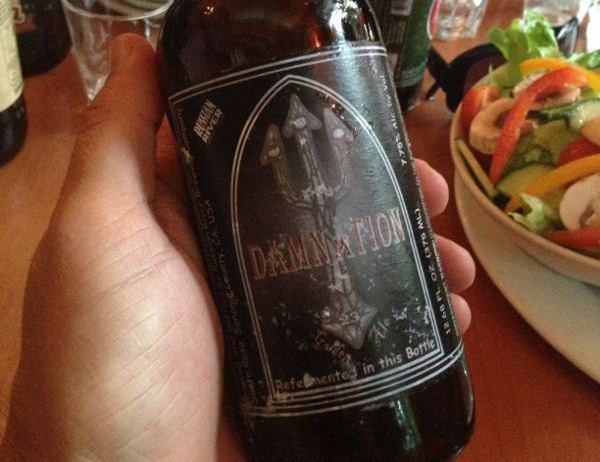 After reading BJ Lankwarden’s book, I was struck by how many imported beers were available in South Africa a decade ago compared to what we have today. Granted, some of the stuff found in our liquor store’s fridges today is awesome and the selection is definitely expanding, but we’ve somehow taken a step back since the turn of the century (the 21st century, that is).

Luckily for me, I have well-connected friends when it comes to beer and I was recently fortunate enough to sit down with a few beer fundis (namely Greg Casey from Banana Jam, Rob Heyns from League of Beers and SouthYeasters board member and homebrewer extraordinaire, Shawn Duthie [AKA my husband/the Brew Master]) to taste an extensive flight of world beers.

We actually started with one of BJ’s beers – that is, a beer that was formerly available in SA and was reviewed in his book. Black Sheep is, at least in the bottle stores I frequent, no longer available locally, but a kindly Brit brought a bottle over for us. I disagreed with BJ’s gushing review “this is an ale as good as it gets…terrific crescendo of taste experiences which are hard to describe”. It was a perfectly decent beer, but not a wow beer and for me, not worthy of four stars. But there would soon be beers that we would all gush over, beers worthy of a whole galaxy.

We sipped our way through beers originating from six different countries but as the beers are largely not available in SA (with the exception of the Gradisca trio from Italy and the Mexican Minerva ITA [imperial tequila ale]), I won’t go on about them. I won’t tell you how Innis and Gunn’s Spiced Rum Finish from Scotland is full of complex layers of banana, toffee, spice and vanilla, nor how Russian River‘s Pliny the Elder – voted the 16th best beer in the world by Rate Beer in 2012 – should be called Piney the Elder, for its wonderful hop aroma of fresh pine.

What I actually wanted to say was how certain beers are an acquired taste and how the US scene is, of course, decades ahead of ours (well, their beer boom started in the 80s; ours only a couple of years ago). A lot of people in South Africa – and among them some beer enthusiasts – are currently struggling with hops. A highly-hopped, bitter beer is quite a leap for a lifelong lover of light lager, so it makes sense that people’s palates will take a while to adapt. Strangely, I was an instant hop convert, but the same cannot be said for the latest beer style that seems to be sweeping the States.

This tasting was my first exposure to a true sour beer, a beer brewed from start to finish with sourness in mind. And I have to say that I’m not quite sure about them. Both Russian River’s Temptation and Consecration are aged in wine barrels, with brettanomyces, lactobacillus, and pediococcus added to give the beers a complex flavour. These are definite ‘beer-meets-wine’ beers, with massive whiffs of barrel and a little dose of instant heartburn to follow up with.

I think perhaps my problem with these beers is that until now, I’ve only experienced such sour flavours in beer gone bad. The sharpness, the mouth-puckering dryness, the barnyardy Brettness – as yet my palate can’t equate these flavours with something I’m supposed to find in a beer.

So what’s the point that I’m trying to make with this blog post? Well, I think it’s this: drink and let drink. There’s a tremendous epidemic of beer snobbery in SA right now (I’m recovering from a bout of it myself) and you might be one of those people who look down on those who enjoy (and here’s a phrase I’m utterly sick of hearing) “fizzy yellow lager”. But for every ale aficionado smirking at the lager lover, there’s a hophead laughing at the ale fan’s inability to enjoy a beer with IBUs in excess of 50. And for every beer drinker who can’t get through the day without a hop hit, there’s a sipper of sour ales thinking that hops are so 2012.

I think if people enjoy what they’re drinking, we should probably leave them to it – they’re bound to branch out and sample something new eventually, with the explosion of beer styles suddenly available in SA. For those with an adventurous palate, there will always be a new style around the corner, challenging our beer palates to evolve.  And if drinkers palates evolve, the brewers will have no choice but to evolve with them…

Five beers for Valentine's cheerWhat women want (in a beer)