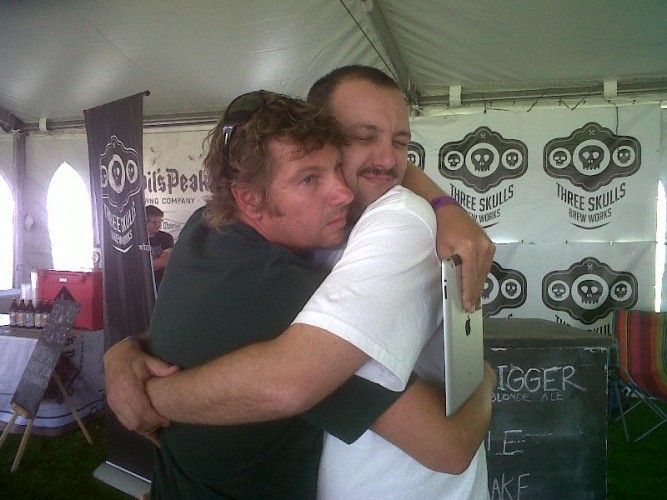 It’s almost that time again – the day that turns perfectly happy single folks into miserable mopers and converts perfectly normal partners into nervous wrecks, stressing over which lame slogan emblazoning a teddy’s jumper is the best way to say ‘I love you’.

It really is enough to turn people to drink, so why not make beer a big part of Valentine’s Day this year? Whatever you hope to get out of Feb 14th, there is a beer that suits the occasion and we here at the Craft Beer Project would like to play boozy cupid.

The scenario: You want to impress the other half on your first night out together

The M.O: You want a beer that says ‘I’m cool’ but that isn’t so big on booze that it has you saying ‘I love you’ before the evening is over.  Let them know that you love your beer, but as with all aspects of a first date, you should hold something back for the next time. If you start date one with a pint of Imperial IPA, where can things go from there?

The beers: Stick with something lightish and sexy – a Jack Black Pilsner, aDarling Slow Beer, Three Skulls’ Gravedigger or pretty much anything from CBC.

The ‘I’ve Got a Headache’

The scenario: You’re in a long term relationship and have no more interest in sex on Valentine’s Day than you do on any other day of the year

The M.O: You want to induce sleep in your partner to ensure that he or she has an enjoyable evening but is asleep before bedtime, allowing you to end your evening watching reality TV or reading homebrew books.

The beers: You’re looking for a big beer – BrewDog’s Hardcore IPA is a good bet, as is their Tokio Stout. Trappist or Abbey ales should work and you could also test the theory that hops are a sedative with a few bottles of Devil’s Peak’s IPA or pints of Cockpit’s Mustang APA.

The scenario: You’ve been dating a while and are hoping to seal the deal on Valentine’s Day.

The M.O: The way to a man’s – or woman’s – heart, they say, is through the stomach and there is a certain ingredient in beer that might help you reach their heart (or perhaps another organ) a little quicker. Hops have many homeopathic uses and some claim that the Humulus lupulus is an aphrodisiac, thanks to its oestrogen content. But ladies looking to get lucky beware – in men, hops are not part of a recipe for love, instead acting as a sedative and a sex drive-killer. Instead consider buying him a stout, either of the oatmeal or oyster variety, both of which are considered an aphrodisiac.

The beers: If you’re hoping to woo a woman, buy her a hop-forward beer such as Devil’s Peak’s Blockhouse, Cockpit’s Mustang or one of the imported IPAs from Rogue or BrewDog. If it’s a guy you’re after, oatmeal stouts are available at Anvil Ale House in Dullstroom and Clarens Brewery in Clarens. Triggerfish also produce a seasonal oatmeal stout. Failing that, buy some oysters to serve with a dry stout or just give your guy whatever beer is close to hand – let’s face it, most men don’t need much coaxing when it comes to these things.

The scenario: Valentine’s Day sucks and to prove that point, you’re staying at home by yourself

The M.O: Feb 14th can be kinda depressing and although you’re happy to be single, you want to forget that this is the day when you’re supposed to be smooching. You want to have a beer or two but drinking alone is a dodgy business so you need a beverage that says ‘I’m drinking because I enjoy it, not to get drunk’.

The beers: You’re looking for something complex, not too high in alcohol and something that isn’t designed to be guzzled. Try a buchu-infused beer, such as Triggerfish’s Bonito or Anvil Ale House’s BooKoo. Other sippers include anything with chilli in it and BrewDog’s Tactical Nuclear Penguin, though at 32%, sipping the latter alone is dubious.

The scenario: It’s a Hallmark holiday that deep down means nothing to you, so you’re shunning what the shops want you to do and spending the night with your mates in the pub.

The M.O: This is just another night so you’re going to do whatever you’d be doing on any other Thursday. Of course you’re likely to be surrounded by couples trying to prove that they love each other more today than they usually do, and your local might be swapping its normal eats for an overpriced set menu, but we admire you giving it a whirl!

The beers: Keep it varied, taste lots and maybe try to steer clear of the stronger stuff. You might hate Valentine’s Day, but it’s a popular evening for proposals and no-one wants to remember the night they got engaged as the night they were puked on, leered at or spilt beer on by some drunk Valentine’s denier. We’d go for Valley’s London Ale, anything from Copper Lake, Mitchell’s, Boston orStandeaven, Devil’s Peak’s First Light or whatever the flagship pint is at your local brewpub.