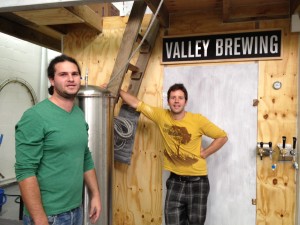 The list of microbreweries in South Africa is constantly expanding, but as one of the Western Cape’s latest breweries gathers momentum, it’s goodbye to another much-loved player on the Cape Town scene.

Lakeside Beerworks officially launched at the SouthYeasters Summer Festival in April 2013, their hefe weiss claiming the top spot in the people’s choice competition. After a few months brewing with Mark and Analize Ter Morshuizen at their Honingklip Brewery, the Lakeside team has finally found its own premises – at the former Valley Brewery in Kommetjie.

Valley launched in early 2012 and their London Ale proved a big hit, especially in the summer months. But after much soul-searching, brewer Glenn Adams decided to sell to the passionate duo behind Lakeside. “It was very sad getting rid of my brewery,” Glenn told me, enthusing about the passionate people he’d met in the industry. Juggling the brewery with his stainless steel business proved tricky though and in the end one of the two just had to go.

London Ale fans will be please to know that the beer will continue to be brewed at its Kommetjie home though, and still under the Valley name. “It’s a good beer and a popular one,” said brewer Morne Uys as he tended to a batch of APA in the kettle, “so we’re definitely going to keep that as one of our regular brews.” This will come as a huge relief to Valley regulars, a loyal bunch who turn up at the brewery for Friday afternoon beers each week, paying on an honesty box system. (All are welcome – it’s a lovely, chilled vibe).

Morne, along with good friend Pierre-Charl du Preez (better known as PC), will be brewing three staple beers under the Lakeside banner – the APA, a red ale and the award-winning weiss. Along with London Ale, there are plans to brew a summery beer under the Valley label, though as yet no recipes are fixed.

Morne and PC are living out a dream shared by many homebrewers looking to go pro – both have quit their long-term jobs (as a financial adviser and a spokesperson for Helen Zille, respectively). A gamble in this new industry but one that neither seems too worried about. “We both pretty much hated our jobs anyway,” laughs Morne. “We’re not going to make a chartered accountant’s salary, but at the same time we don’t care because we don’t want to be chartered accountants! We’re having fun and the pressure of making it work is great – it makes us better brewers.”

Although Morne has been brewing at home for close to three years, he and PC only started to brew together last year. “PC wanted to start brewing but the urn I used as a kettle was broken,” Morne explains. “I told him we’d need a pot and he said ‘no problem – I can sort that’, then he rocked up with this 450-litre pot!!” It was a little larger than Morne was used to but realising that brewing bigger batches was doable turned out to be the first step in the two deciding to go pro.

The team is now brewing three to four times a week. Find their beers in liquor stores including Roeland Liquors, Liquor Boutique in Gardens and Bottelary Hills Wine Centre in Stellenbosch. If you want to drink in, try the V&A’s Market on the Wharf, The Annex in Kalk Bay, The Stoep & Swing in Simon’s Town and the much anticipated Beerhouse on Long, due to open next month. You can also buy take-home beers directly from the brewery or join the regulars for the freshest draught craft on Friday afternoons.