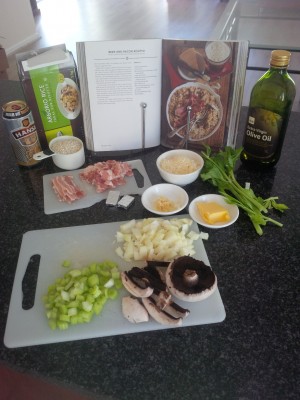 1.75 litres chicken stock
a glug of olive oil
1 pack streaky bacon
1 large onion, diced
2 large sticks celery, sliced and diced (keep leaves for garnish)
2 cloves garlic, crushed
500 ml Arborio rice
200 ml of a hop-forward beer – I tend to use whatever I have in the fridge to be honest. In a slightly tongue-in-cheek move, I used Hansa Pilsener this time around. Well, y’know – it does have the kiss of the Saaz hop (though more of a peck on the cheek than a full-on snog…). It’s a good idea to let the beer warm up to room temperature before using it.
50 g butter
100 g grated Parmesan cheese
2 or 3 large, brown mushrooms
Salt and pepper

Heat the chicken stock in a saucepan over medium heat. Keep it at a gentle simmer. (Making your own stock is ideal, but I generally cheat and use cubes). Dice about half of the pack of bacon.

Heat the oil in a large pot and fry the diced bacon until browned. Add the onion, celery and garlic and keep stirring until just soft. Add the rice and a pinch of pepper, stirring constantly so that the rice toasts but doesn’t brown. Once the rice has absorbed the flavour of the bacon and onion, add the beer, ensuring that it evaporates before you add any stock. 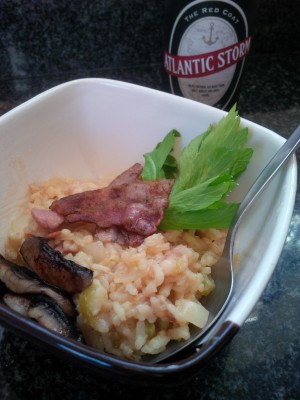 Once the beer has evaporated, start to add the stock. Keep stirring and adding stock a cup at a time, each time letting the stock be absorbed by the rice before adding more. Do this until the rice is al dente. You could try ditching the stock altogether and use only beer for the recipe if you’ve got enough to spare…

While the rice is cooking, fry the rest of the bacon until it’s good and crispy. Put it to one side then cook the sliced mushrooms in the bacon fat.

Once the rice is ready, add the butter, stir in the Parmesan, garnish with a couple of crispy bacon rashers, the mushrooms and a celery leaf and enjoy with a glass or two of beer. Pairing-wise, I like something fairly high in hops and well-carbonated as both things help to cut through the rich, creaminess of this dish.