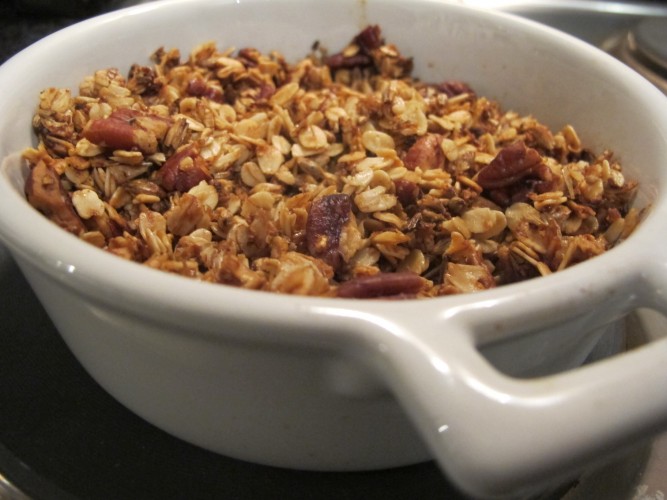 There’s a strange idea floating out in the world that beer is not a breakfast beverage. This is quite ridiculous – not only can you drink beer for breakfast (I suggest restricted this to weekends/non-working days), you can even make breakfast with the ingredients used to make beer! Before I continue, please do NOT sprinkle hops over your breakfast cereal. This would possibly ruin your morning and definitely ruin your palate for a while… There are no hops in this recipe, only fruits that you might expect to find in hop aromas – citrus, mango and the like… There is malt here though, so if you’ve got some extra malt left over from your last brew, or you’d like to somehow incorporate beeriness into every meal, here’s a rather tasty way to make toasted malty muesli. 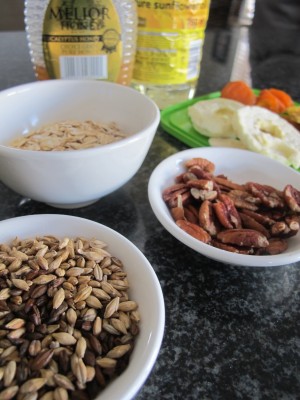 1 cup crushed malted barley (NOT the type of barley you buy in a supermarket to add to soups!)

Before you begin, make sure your malt is crushed. If you’re a homebrewer, you probably have some version of a mill in your kit. If you’re a keen cook wanting to try out something different, when you buy the malt from a homebrew store, ask them to crush it. Alternatively, if you’re a real hands-on cook, you can crush it with a pestle and mortar. It’s hard work and insanely boring – I wouldn’t recommend it. I also wouldn’t recommend using uncrushed malt – most is plenty soft enough to chew, but every so often you’ll find a grain that could just send you to the dentist…

Preheat the oven to 150 degrees (C). Heat the honey and oil in a saucepan until it’s liquefied. You can substitute half of the honey for brown sugar for a richer, more Belgian beer-like flavour. 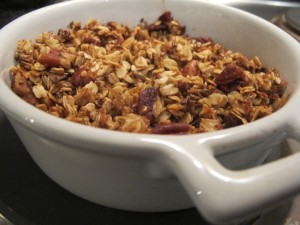 Combine the the oats, crushed malt and pecans in a bowl. Add the honey/oil and mix well. Line an overnproof dish with baking paper and spoon the mixture into the dish. Bake for about 45 minutes, giving it a stir every 10-15 minutes. Once it’s looking a liight brown colour (think amber ale rather than Munich dunkel…), transfer the muesli to a separate dish to cool and crisp up.

Meanwhile, chop up your chosen fruits. You can even try and mimic beer styles if you’re an uber beer geek – think banana and perhaps a touch of powdered clove if you fancy a weissbier breakfast, all the tropical fruits you can find for an American IPA or raisins if you’re aiming for a Belgian dubbel… Alternatively you could just use fruits that you like/whatever you have to hand as I did – mine included apple rings, not a flavour you ever want to find in a beer but tasty on breakfast cereal!

Once the muesli has cooled, add the fruit, mix well and serve with milk or yoghurt. Pair with a dry stout (such as Apollo Brewing Co’s) or, if you’re on your way to work you might have to settle for a cup of coffee.

Option: If you’d like a little more malt sweetness coming through, instead of baking it with the other ingredients, add the crushed malt with the dried fruit once the muesli has cooled.