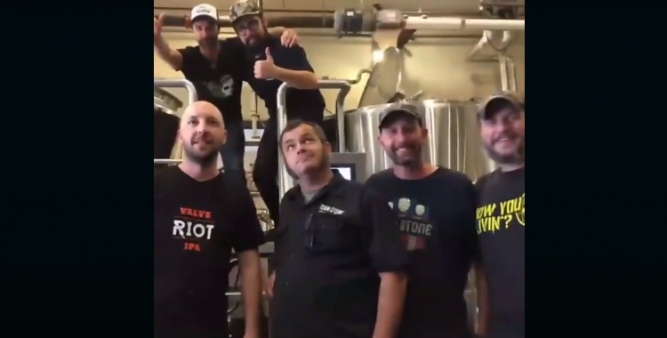 If you’ve ever wanted to taste a beer from Stone Brewing, but travelling to the States is a bit beyond your budget, here’s your chance. Cape Town based Riot Beer have brewed a collab IPA at Stone’s San Diego brewery and a very limited amount will be on tap this weekend in Cape Town.

“This was a magnificent opportunity for us,” says Riot’s co-founder, Marc Fourie. “It took about a year of emailing to get a slot in their very busy schedule – it’s been a work in progress since September 2017.”

The beer is a 6.8% IPA using all South African hops – African Queen and Southern Passion, to be precise. “Just don’t expect a West Coast bomb,” says Marc, “because you just don’t get that from South African hops.” But if you are looking for a classic West Coast IPA, you might be in luck next year. “This is episode one;  we’re hoping to convince them to come to South Africa next year for episode two…” says Marc.

The beer is called Cape to Cali IPA and it launches today, Friday 23 November at five venues: Banana Jam Cafe, Beerhouse on Long, The Biggest Little Beer Shop, Mojo Market and Stellenbosch Brewing Company. Each venue will have just one keg, so get there quick before it all goes.