How SAB won the internet on #SANBeerDay 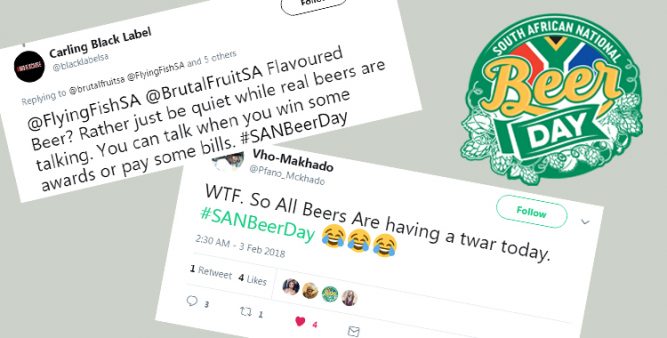 I came up with the idea of hosting a #SANBeerDay a couple of years ago. We tend to tip our collective hat to International Beer Day in August, but this day was created with the northern hemisphere in mind. I mean, sure – you can (and most likely do) drink beer all year but you have to admit that a cold pint goes down better in February than August. So I floated the idea of our own day and the brewing community responded with the kind of boundless enthusiasm you usually expect only from puppies and pre-school kids.

This year saw a 60% increase in the number of events and most importantly of all it also saw the hashtag #SANBeerDay trending on Twitter for the day. (N.B. I am aware that people attending events and buying beer is more important than tweeting about it). Of course, this was in no small part thanks to SAB. Some people have questioned whether SAB should be a part of SAN Beer Day, but the point of the day is not to celebrate craft beer, but to celebrate South African beer. Excluding SAB also excludes a large portion of South Africa. Anyway, if you ever had any doubts about SAB, read on.

Let’s #ComeTogether for #SANBeerDay and celebrate with SA’s most South African beer. pic.twitter.com/plsUZc1PPc

Castle Lite quickly hot back with their own banner:

Thanks @CastleLagerSA – happy #SANBeerDay to you too. Sure you’ve got age on your side, but SA’s coolest peeps will always choose #ExtraCold. pic.twitter.com/BFQvc25JDp

And then the twar began. Now I am aware that it might well be the same person manning all of SAB’s accounts – and there’s a sort of brilliance in that too. Castle Lager couldn’t wait to bring up an old ad campaign of Castle Lite’s:

And then one of our smallest craft brands stepped into the ring:

?Alright, stop
Isomerize and listen
Craft is back with brand new invention
Hops grab a hold of us tightly
and flows into a glass daily and nightly.
Will we ever stop??

Only to quickly get smacked down by Castle:

From there on, it just became hilarious. The gifs were flowing, the public got involved, the SAB brands did their best to bait Heineken and Windhoek, and Flying Fish suffered such serious burns they might have to don a black suit, develop breathing difficulties and become the next dark lord of a galaxy far, far away. For me, it just embodied what beer is all about – having a laugh and not taking shit too seriously. If you have a lot of time to kill, you could find every single tweet with the #SANBeerDay. Or here are some of my favourites:

Is @FlyingFishSA even a beer ? Surely they can’t be involved in #SANBeerDay maybe they do a #JustSlighltyStongerThanOrosDay

@FlyingFishSA @BrutalFruitSA Flavoured Beer? Rather just be quiet while real beers are talking. You can talk when you win some awards or pay some bills. #SANBeerDay pic.twitter.com/WFEJQNW5qx

Cheers! Oh – and if you do the social media for any of these accounts, please drop me a line. I owe you a beer. Or at the very least a virtual high five…