Seven tips for the 7th Cape Town Festival of Beer 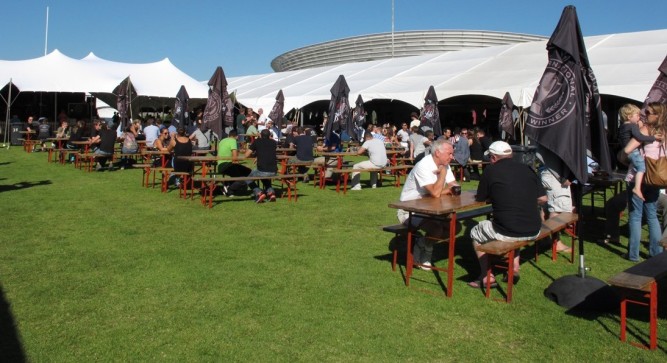 It’s less than two weeks until one of my favourite weekends of the year. The last weekend in November marks the 7th annual Cape Town Festival of Beer and you should be attending. I’ve followed the fest from its first incursion (I like to think of it as the Black Label fest – there was a sole stall with southern Africa’s entire craft beer offering back then) through to the full-on homage to 200-plus beers it has become. So here are my seven tips for getting the most from Africa’s biggest beer fest. And if you pay attention, you might just find an opportunity to win yourself a couple of tickets. 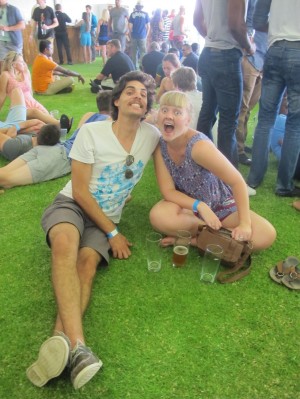 This random couple seem happy with their choice of session

Unless you’re going to attend the whole weekend, decide what you want to get out of the fest. Are you a beer geek who doesn’t have a proper job and likes chatting to brewers about their hopping schedule? Get there as the Noon Gun goes off on Friday. More of a big raucous booze-up fan? Then it’s Saturday afternoon/evening you’re looking for. Families and lovers of quiet beers will dig the Sunday, while those wanting to combine awesome tunes with awesome beer should sign up for Friday eve (Watershed are playing!).

There are a lot of beers on show and unless you’re there all weekend, you can’t hope to taste them all, so do a little research, take an investigative stroll on arrival and make a note of the must-tries, the want-to-tastes and the only-if-you-have-times. To give you a bit of help, here are some new(ish) breweries to look out for and a few brand new beers. Little Wolf are debuting at the fest – check out their brett saison and dry-hopped cider. Gallows Hill will be making their annual appearance – their beers are tough to find the rest of the year and they tend to have several different brews on offer over the course of the weekend. Dissident Brewing will be sharing a stand with Afro Caribbean – look out for a few special brews. Stellenbosch Brewing Company are also exhibiting for the first time, hopefully with their new Mass Hoppiness IPA on tap. Plus, look out for one off/special/collab brews from Jack Black, Lakeside, ACBC and Riot, among others.

3. Don’t be a freeloader

Tasters are free at the fest, but this doesn’t mean it’s an all-you-can-drink event. Before you go around taking free samples of every single beer on show and getting hammered without spending a solitary rand, remember that the brewers have not only paid to produce their beer but also paid for a stand at the event. The idea of the tasters is for you to sample one or two brews to help you to decide which you’d like to order a pint of – it’s not an excuse to leave your wallet at home. 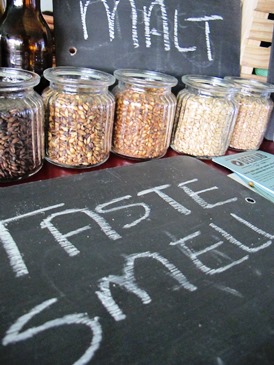 Wake up and smell the malt

4. Try and learn a little

The CTFOB is not just a drinking fest, it’s an all-round celebration of beer, so while you’re there try to learn a few new things about your favourite beverage. At quieter times (Friday daytime, Saturday as the gates open, all day Sunday) you can chat to the brewers all you like. If they have drinkers queuing ten-deep, hop over to the homebrew stands to talk beer and brewing – this year the Helderberg Homebrewers will have a stand for the first time, and of course, the Southyeasters will be on hand all weekend to brew, chat beer, sell tasting glasses and give out samples of an Irish red ale brewed especially for the fest,

For the first (?) time, the Festival of Beer will also feature cider. If you’re normally hopelessly devoted to grain, it’s a good chance to get out there and taste what’s happening in SA’s cider scene. Exhibitors include Sxollie, Cluver & Jack, Alpha, Everson’s and Windermere.

While you’re sipping, why not join in the #SheLovesBeer scavenger hunt? I don’t know much about what’s happening yet, but follow the ladies of the SA beer world on Twitter and find out how to participate and what you can win. Beer and games – it really is the best possible pairing. 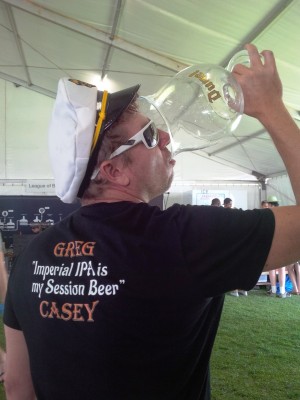 Win tickets to #CTFOB and you too could be this drunk…

7. Be glad you read this blog

And now, by way of reward for reading the rest of this post, here is a chance to win tickets to the Fest! Huzzah! All you have to do is tweet the following statement, filling in the blank with your most meaningful thoughts…

I have two double sets of tickets to give away to the Saturday session. Enter as many times as you like. First winners announced November 18th, with the second winner announced on Hump Day next week.

See you at the fest!

The Cape Town Festival of Beer runs from November 25th-27th at Hamilton’s Rugby Club in Green Point. Tickets, available from Webtickets, are R150, which includes a branded glass (for tickets purchased online only). Kids are R50 – there is a play area.