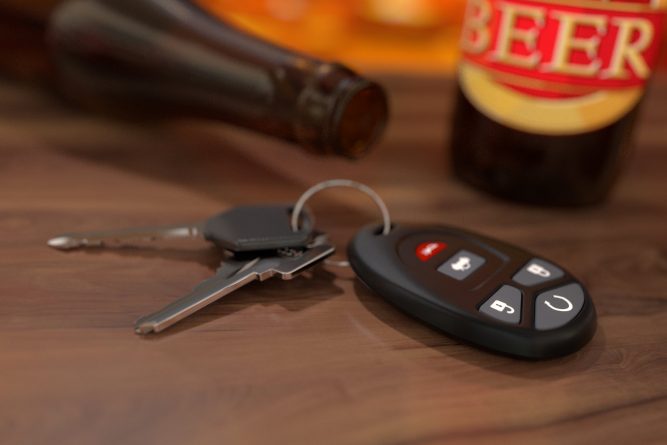 South Africa has an issue with drink-driving, and I am a part of the problem. I’m pretty sure you are too.

Don’t get me wrong. I’m really careful when it comes to not driving after a night in the bar. I almost always Uber to any beer-related event and on the rare occasion that I do drive, I never have more than two half pints over the course of an entire evening.

But wait – didn’t I just admit to being a part of the problem? And didn’t I just accuse you of the same? Indeed I did, and here’s why: although I’m very careful myself I don’t necessarily extend that care to friends or fellow drinkers. In other words, I won’t drive while under the influence, but I don’t always stop others from doing exactly that.

I do try. I have, on occasion, shamed friends into leaving their cars overnight at whatever establishment we’re drinking in. I’ve nagged people into leaving their cars at home before the night begins, reminding them that “just a couple” isn’t actually a thing and that an Uber really isn’t that expensive. I’ve even taken keys away from a friend too tipsy to drive. But I don’t do it enough. And I’m betting you don’t either. 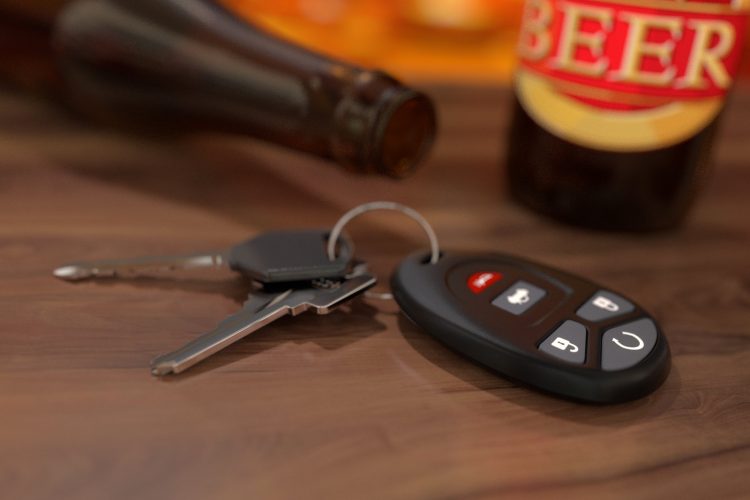 Think back to the last homebrew meeting or beer launch you attended. I’m betting there was someone there who really shouldn’t have driven, but did. Someone who you looked at and thought, ‘shit – I hope they’re not driving’, but somehow didn’t quite have the balls to confront. I’m not necessarily talking about someone who’s stumbling around, knocking over full pints and dancing on the bar. But it really doesn’t take much to be over the limit, and the problem is that once we are, we tend to have a hard time admitting it.

This is why we need to create a culture of being brutally honest with those in our circle. Why is it so tough to tell a friend that they’re too drunk to drive? Is it some weird pride thing perhaps, where people don’t want to admit that they can’t hold their booze?

It’s always tough to tell someone that they’re not good at something. But this isn’t about being a good drinker – whatever that is – or about being able to handle your alcohol. I know guys who seem to be able to drink and drink and still not slur or stumble and I know similar sized guys who, to quote a friend, “sound like they’re speaking underwater Bulgarian” after a couple of IPAs. But regardless of how drunk or sober they might seem, there comes a point in the evening – quite early in the evening – when they are all over the limit to be able to safely and legally drive home.

So if a friend tells you that you’ve had too many beers to safely drive, don’t take it as a personal affront. It’s simply a physiological fact – like if someone told you that if you ate dozens of burgers and cakes and mountains of mashed potato for breakfast, lunch and dinner every day, you would end up putting on weight. It’s not that you’re not good at staying skinny – it’s just science. 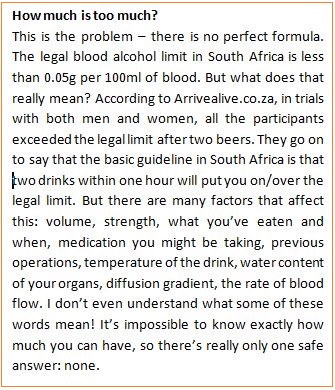 “I’m fine,” people say, as they sip on their third pint. “I’m drinking slowly, I’m alternating with water, I’ve had plenty of dinner.” But just because you feel fine, doesn’t mean you are fine. I mean, you might actually be lucid and your reactions might not be massively impaired, but in the event that you do hit someone – another car, a drunk pedestrian, a kid running out into the road – and you’re over the limit, then you’re heading to what I can only imagine must be a pretty unpleasant prison cell.

It simply isn’t worth it. Get an Uber. Get a drive home. Drink closer to home so your ride doesn’t make too big a dent in your pocket. Find a designated driver. Drink at home. Listen to your friends when they tell you to hand over the car keys – they’re not being dicks. They just don’t want you to die.

For all I love SA, the culture of drink-driving has bugged me since the day I moved here. It seems to cross all cultures and all socio-economic groups. Over the years I’ve heard every excuse: South Africa doesn’t have good public transport; taxis aren’t safe; I only live around the corner; it’s fine – I’ll bribe my way out of it; it’s OK, Waze will tell me where the roadblocks are (do they also tell you where the pedestrians stepping out onto a dark street are?)…

They’re all bullshit and we need to start feeling comfortable enough with the people we choose to drink with to call bullshit, to stop our friends from getting behind the wheel. I’m going to pledge to do more, to try harder, and I hope you’ll join me.  It will make you unpopular in the short term, but in the long term, it will keep your friends out of jail and your fellow South Africans out of the morgue. And I think that’s worth a little name-calling at the bar.