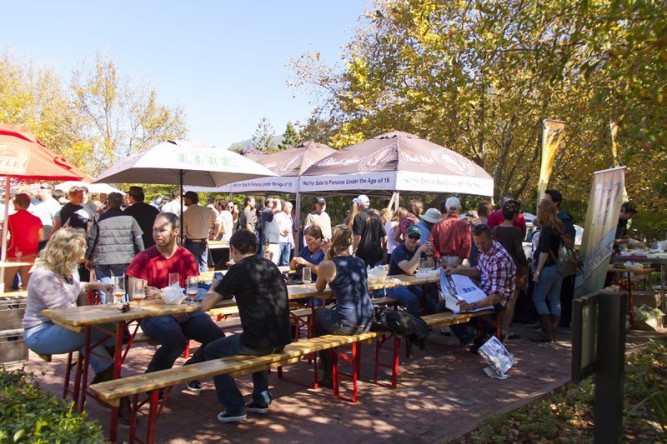 Two years on, a lot has changed. Thankfully, the weather was still great, the beer was still plentiful and the vibe was still the same. I find this to be one of the most pleasant, enjoyable atmospheres at pretty much any South African festival. Or perhaps any festival at all. Despite the ‘all you can taste’ draw, people are interested in what they’re drinking and very few people turn up simply to get sloshed. Questions are fired, feedback is given, admiration for what the homebrewers are churning out in their own kitchens and garages is rife. It’s just all terribly nice.

What has changed hugely over the past two years is the number of brewers exhibiting their wares, the number of beer lovers turning out to drink it and above all, the quality of the brews on offer. Two years ago only two brewers poured their beer from taps – everyone else was in bottles. Kit brewers and those doing extract or partial mash brews numbered more highly than their all-grain counterparts and I must say that a fair amount of what was available was, well – let’s just say I couldn’t have managed a pint of it.

But now beer is booming in South Africa and the SouthYeasters fest has stepped up its game so much that many patrons found it tough to believe that these guys were backyard brewers rather than commercial purveyors of craft beer. People brought banners and t-shirts bearing their homebrew moniker, taps were almost as numerous as bottles – and those pouring from the bottle had designed and printed labels every bit as professional as many of the established craft breweries. Of course, many of those present are indeed looking to go pro. Lakeside Beer Works, whose weiss won this year’s people’s choice award, will soon be selling their ales (blog post to follow shortly), as will The Winemaker’s Club and hopefully Bad Dog Brewery.

Among the stands were two craft breweries – Honingklip and Triggerfish – who started as homebrewers in the club and there was a special guest star/rock star appearance from Wolfgang Koedel and the Cape Brewing Company. Wolfgang was part of the judging team for the Wolfgang Cup (no, the name is not a coincidence) which judged the best weiss in show. It probably wasn’t a great surprise that the prize went to affable German homebrewer Jan Schmidtborn, whose weissbier is always a hit at the monthly SouthYeasters meetings. (For a full list of prize winners, see the SY Facebook page)

If the SouthYeasters Festival is anything to go by – and judging by homebrewer-turned craft brewer trends in other countries it most certainly is – then we have a lot to look forward to in SA. Alas I did not taste any of the beers this year (I was swamped pouring hubby’s insanely popular biltong beer, as well as our own Fool’s Gold…plus the Brew Mistress has a Brew Bun in the oven!) but I’m already looking forward to next year’s event, where the beers are destined to be tastier, more polished and more numerous than ever.

This post was originally published on The Craft Beer Project 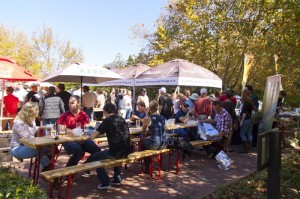 What women want (in a beer)Non-alcoholic beer tasting