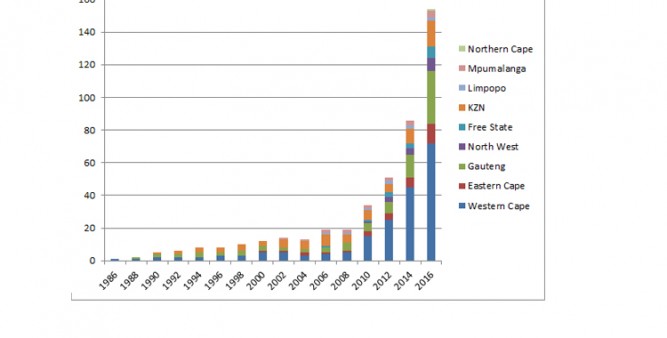 I regularly get asked for statistics on the South African craft beer scene – how many breweries are there, what are they brewing, how much are they brewing… I can never offer any answers as there aren’t any statistics. So this year I attempted to put together my own set of stats. I emailed every brewery I could find – including contract breweries – that was licenced and selling – 156 of them at the time (August 2016). I acknowledge that there are now more – I would put the number at around 180 as 2016 comes to an end.

There are two major problems when it comes to collecting data on the SA craft beer scene. The first is getting brewery owners to respond to your emails. I have to say, I was pleasantly surprised at the response. Of the 156 breweries, 86 responded and the 86 represented a perfect cross-section of the SA beer scene – from the nano, garage-style setups to the larger outfits. The second problem is actually getting info on volumes – to the question ‘How many times per month do you brew?’, responses included ‘Enough’, ‘When I feel like it’ and ‘Prefer not to answer’. So we worked with what we had and have put together some semblance of statistics for the South African craft/microbrewed beer industry. Here are the results – hopefully it gives some insight into where we are, where we’ve come from and where we’re heading. 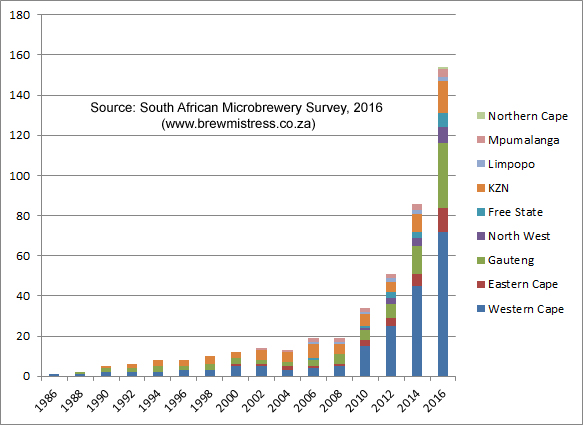 We now have breweries in every province, with the bulk still found in the Western Cape (72 of the 156). In the past two years we have seen immense growth nationwide – around 50% from 2014 to 2015 and again from 2015 to 2016. There are 22 contract breweries across the country (although not all responded – this figure is from other research), and there is fairly rapid growth in the contract brewing sector.

People are constantly talking about the beer market being saturated, but while numbers are constantly increasing, the breweries in South Africa are producing fairly small amounts. The average brew length is 888L – that is, the amount of beer brewed per batch, while the median brew length is 600L – pretty small amounts. Of course, it’s not all about the size of your kettle – it’s also about how often you brew and what your fermentation capacity is. The survey asked various questions to allow us to work out the average monthly output for a South African microbrewery – the figure is 10,250L per month. Of course, some breweries produce way more and many produce even less, but this figure is fairly low, with some business minds suggesting that 12,000-15,000 litres per month is the bare minimum for a production facility to start making a profit.

Figures suggest that the total annual production of microbrewed beer in South Africa is around 20 million litres, which means it still accounts for less than 1% of the beer market in South Africa.

Other questions attempted to ascertain how many people are formally employed in the industry and what the breakdown of beer styles is, but we’re still working through this data. It will be available on request on a case by case basis – get in touch if you’d like to know more. One thing we do know is that, while most SA microbrewers have been brewing (homebrewing or professionally) for more than five years, 60% of South African brewers have no formal training at all and only 13% have a recognised brewing qualification. Perhaps 2017 is the year to start studying for the IBD, or at the very least, looking into the BJCP exam…