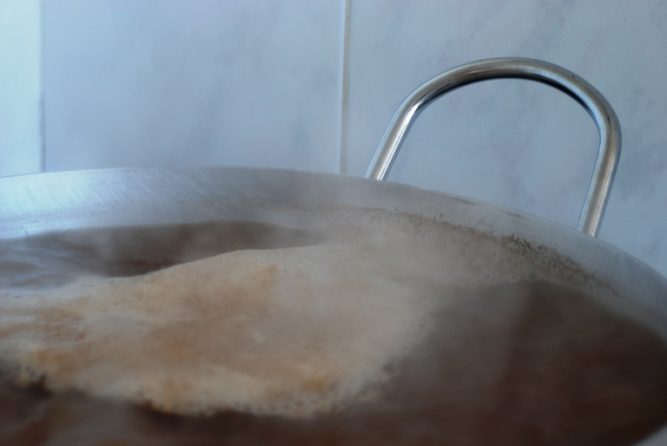 South Africa is undergoing a major homebrewing boom, largely thanks to the nationwide alcohol ban installed at the start of lockdown. Homebrewing groups on Facebook are alive with new members, but I have noticed that a lot of newbies are making some serious errors with their first-time brews. These mistakes are not going to cause harm. As I mentioned in this post, however badly you screw up a brew, it ain’t going to kill you. But it might taste pretty awful and could put you off pursuing the hobby. So I collected a band of experts from the brewing industry and asked them for their top tips for beginner homebrewers. 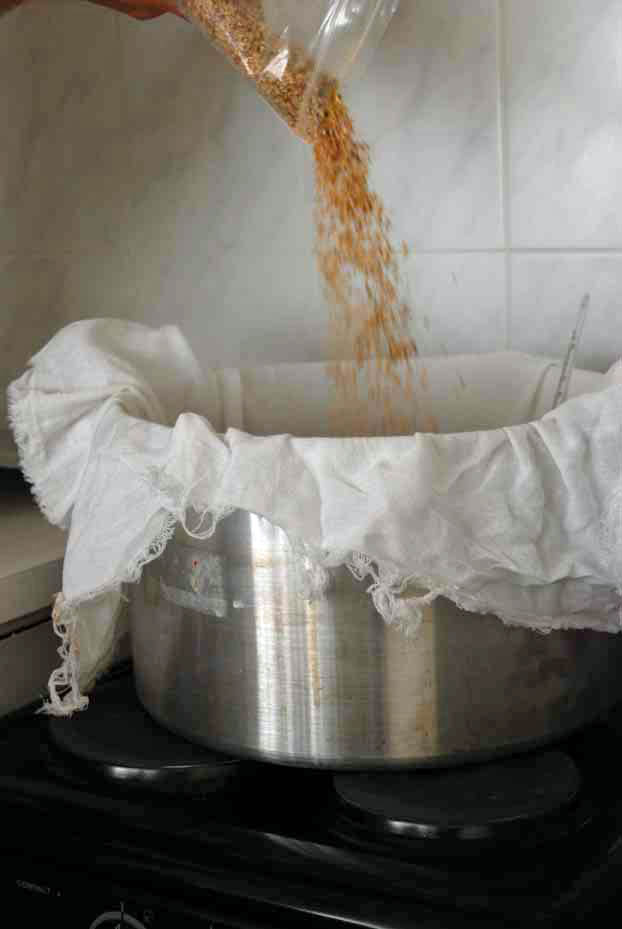 Mashing in for a “brew-in-a-bag”

1. Don’t stray from the recipe

“It may seem rock ‘n’ roll to add your own twist to the ingredients with some old forgotten spices from the back of your cupboard. But you’re not JC Steyn (South Africa’s Heston Blumenthal of Craft Beer), so until you’re a bit more experienced, stick to the recipe that has been been provided by your local homebrew store or expert homebrewer.” – Troye May, host of the #Beertime podcast and host of Brewing the Republic.

2. Don’t try and boost the alcohol content with dodgy substances

“Beer is brewed with four basic ingredients – malted barley/grain, hops, yeast and water. When you’re starting out, stick to these (or speciality beer brewing extracts or sugars). And never add toxic chemicals to try and boost the alcohol. This is the only way your homebrewed concoction could actually kill you.” – everyone in the brewing industry.

3. Simple water treatment can save your beer

“Add half a crushed Campden tablet per 20 litres to your brewing water. It will get rid of chlorine and chloramine in the water which can cause an off flavour called chlorophenol, which is an unpleasant “band-aid” aroma often found in homebrew.” – Bruce Williamson, avid homebrewer and long-time member of the Wort Hog Brewers Club.

4. Don’t get too hung up on numbers

“Some of the best beers I’ve made have been from “botched” numbers. Sometimes your gravity, temperature, pH, etc. might be a few digits off, but don’t stress too much. If you’re off by a couple, it’s not going to ruin the whole batch. Relax, have a beer. You might even find the brew turns out better than planned!” – Jan de Buhr, brewer and co-owner of Big Sip Co, Botswana’s first craft brewery.

5. Sanitise everything, all the time

“When it comes to brewing, there is no such thing as over-santising. Your entire batch of beer relies on your sanitation. From pipes to fermenters to your hands, if you are using it, sanitise it. In the industry we use santiser like acidisan or Perasan but in a pinch, you could use 4ml of household bleach per litre of water. Although some say you don’t need to rinse at this concentration, it’s a good idea to rinse thoroughly with boiling water just in case – bleach can lend unpleasant flavours to the end product.” – Sam Nolan, president of the Southyeasters. Check out Sam’s “brew in a bag” video here.

6. And remember that cleaning and sanitising are not the same thing

“First, you need to clean your equipment. In particular, all the equipment that will be touching cooled wort. Cleaning involves using surfactants and alkaline cleaners like caustic soda, or sodium metasilicates (commonly found in things like dishwasher cleaners). Second, you should rinse your cleaned equipment with water and then sanitise with an acidic sanitising agent, preferably one that doesn’t require further rinsing, such as peracetic acid, Starsan, or one of the other commercially available no-rinse sanitisers.” – Marcel Harper, founder of Beginner Brewer and regular contributor to On Tap Magazine.

“It can be tempting to use less yeast (called underpitching) to save a few bucks, but this is a bad idea. Using too little yeast will slow fermentation, which can cause all sorts of inappropriate and unpleasant flavours.” Megan Gemmell, owner and brewer at Clockwork Brewhouse. 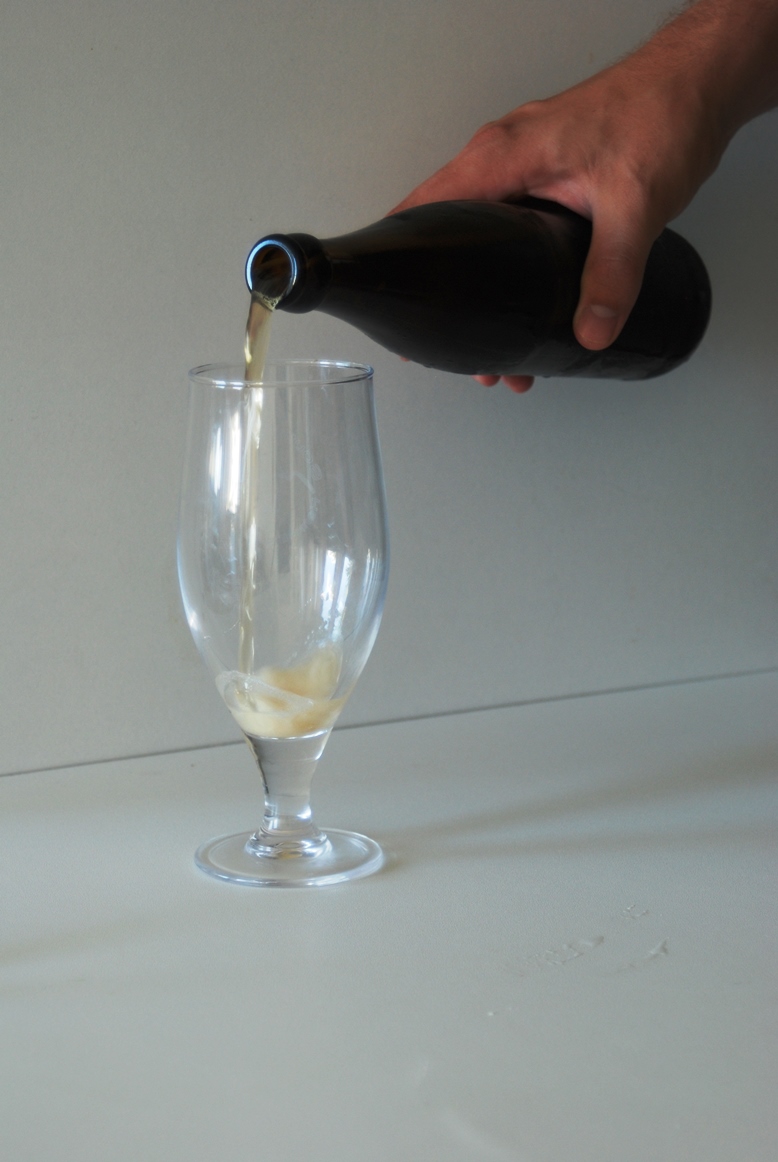 The moment you’ve been waiting for

8. Never open the fermenter to check on fermentation

“It’s tempting to pop the lid to see what’s going on, but this is a sure-fire way to contaminate your beer. The airlock should tell you when fermentation has started, and if you give it time, it will do it’s thing. Cleanliness and santation are crucial at the fermentation stage. Santitise everything that touches the wort post-boil, including yeast packets, the scissors you cut them open with and of course, your hands. And don’t open the lid!” – Cameron Doubell, founder/brewer at Stone Crow Brewing Co.and occasional helper out/frequent drinker at Afro Caribbean Brewing Company.

“The best things in life are worth waiting for and beer is one of those things.  The brewing process take about 3-5 hours, but it will still be a couple of weeks before your beer is ready to drink. The yeast generally starts working 12 -36 hrs after it has been added to the wort (the name given to yet-to-be-fermented beer). Just leave it alone and let the yeast do its magic. Once the yeast has eaten all the sugars, it becomes dormant and will sink to the bottom of the fermenter and the beer will clarify. It will take about two weeks for the yeast to do the job properly. Then you just need to bottle and carbonate, which will take about a week. Rishing the process will result in an inferior end product.” – Wendy Pienaar, co-owner of At Hops End and founder of Beer Boot Camp.

10. Ask for help – homebrewers are a friendly bunch

“Find out how to do it safely. It’s easy and people are really willing to help. Contact your local homebrew club for advice. Try the Southyeasters in Cape Town, or check out a list of other clubs found around the country here. Clubs usually meet up once a month, but until that’s allowed, they’re making instructional videos and giving out advice via their Facebook pages and groups.” – Cameron Gray, avid homebrewer and former president of the Southyeasters.

Looking for an easy way to brew some beer at home? You can now buy pre-made wort and cut out the entire brewday!