Five uses for an undrinkable beer

So you’ve bought a beer, it turned out to not be great, you’ve taken action to alert the brewer – now what? There are few things sadder than the sound of your R30 bottle of ale glugging down the sink so STOP! Don’t tip away that sour ale or the ancient lager you found in the back of your garage – it can be reincarnated as something useful. Here are five ways to make use of a beer you might not want to drink: 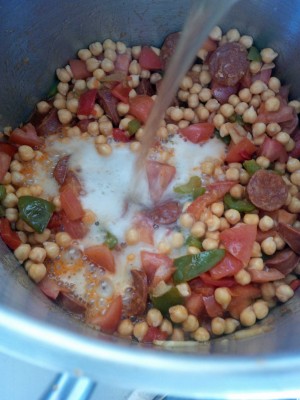 Or a stew. Or a sauce. Or some bread. Or a soup. You get the idea – cooking with beer is a lot of fun, very tasty and for me, the most satisfying way to use up a beer you couldn’t drink (not sure I’d use a butyric beer for cooking, but have been lucky enough to only get one baby puke brew in my life so far…). If you’re trying to keep some of the beer’s flavour in the recipe, such as with this superb apple crumble recipe, you might want to steer clear of brews with off-flavours, but when it comes to something like a soup, a stew or a beer and bacon risotto, you might just be able to get away with using a slightly sub-par beer in your cooking. Keep an eye on the blog for more beery food recipes coming soon!

2. Pretty-up your garden with it

Not only can beer (apparently) get rid of brown spots on your lawn, it can also attract butterflies (when mixed with a few other kitchen ingredients) and more morbidly but perhaps more usefully, you can use it to kill slugs and snails. Like any sensible being, snails (and slugs) are attracted by beer. They can’t resist it, so all you need to do is build some sort of contraption that they can climb into but can’t get back out of. Killing garden pests is not my favourite pastime, but surely drowning in beer is a fine way to go – much better than melting into a fizzy puddle of goop when some gardener pours salt on you anyway… 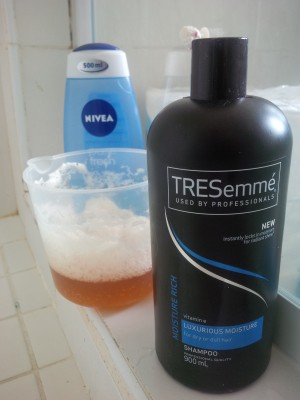 3. Pretty-up yourself with it

I’ve been meaning to test this out for years, so have just taken a break from the laptop to wash my hair…then condition it with beer. The beer in question was Devil’s Peak First Light circa 2013. Yeah, I wasn’t going to drink it, so I decanted about 300ml into a jug, warmed it up in the microwave then tipped it over my head. Apparently it makes your hair soft and silky and strong and all the things that commercial conditioners claim to do… It also gives you a slight beery aroma that lingers all day, it seems, so that’s nice. Not sure what the teachers at my son’s nursery school will think later, but who cares – I have shiny hair!

4. Use it as an educative tool

You’ve opened it, you’ve smelt it, tasted it and know it’s not quite right. If you’re not sure what’s wrong, start off by educating yourself. Check out some basic info on off-flavours and their causes – John Palmer’s website is a great resource, and this piece from Draft Magazine is superb. Once you know what’s wrong consider introducing your friends to the wondrous world of off-flavours – maybe do a blind tasting with some great beers and see if people can pick out the bad beer. The more people know about inappropriate flavours in beer, the more the South African beer industry will grow. If you’re keen to learn more, join The Brewster, Apiwe Nxusani for a sensory analysis course accredited by the illustrious Siebel Institute in the USA. 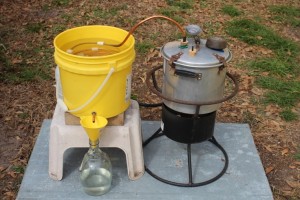 This is a still. Not some sort of homemade explosive. Though the results of the distillation might burn somewhat…

There are mixed opinions on whether beer makes good distilling fodder – some say that the hop content doesn’t transform too well into liquor, others say that’s nonsense and that once distilled you can’t taste the original product. I know of several microbreweries in South Africa that distill their whoops batches into moonshine, beer schnapps or ‘beerandy’. Obviously you’re going to have to have a lot of beer to get a few ounces of liquor so you’d probably need to store your bad beer purchases in a big old slop bucket until there’s enough to make it worthwhile. Either that or make use of a failed batch of homebrew for your experiements. Here’s an idea of how to build your own still at home – if anyone tries it please let me know!

So how do you use undrinkable beer? Do you have a favourite dish you use it in? Do you bathe in it? Turn it into beer cocktails? Share your ideas in the comments below!