Friday beers. It has to be one of my favourite rituals in life. It doesn’t matter which country I’m in, or what kind of job I’m doing, the arrival of Friday afternoon has always been synonymous with a round or three of cold, local beers with a bunch of happy folk joining together to toast getting out of work for a couple of days.

It spans borders and professions. As a junior reporter on a provincial newspaper in rural England, we’d knock off early on Friday (once the higher ups had already called it a day and headed home) and congregate in one of the tiny market town’s pretty pubs. In South Korea, English teachers from surrounding schools would wander over to the lovely rooftop terrace of the only bar in town that served craft beer. And in South Africa, despite the fact that I basically drink beer for a living, have no colleagues, no office and no timetable, I still look forward to 3pm on a Friday, when I meet up with mates for a few pints to celebrate the arrival of the weekend. 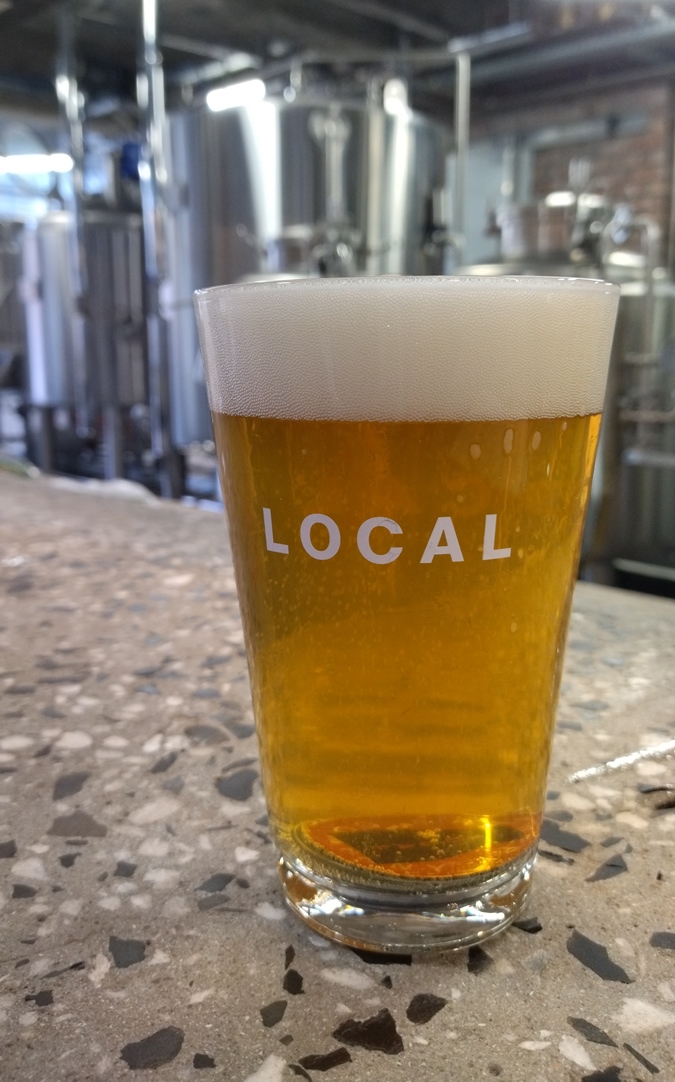 A pint of Local Lager at Local Brewery & Co. in Woodstock, Cape Town

And since there is an ever-increasing number of cool places to grab your much-deserved Friday Beers (and because I am determined to blog more in 2022) I have decided to launch a new series. Every Friday until I run out of ideas, you’ll find a recommendation for a South African brewery or bar that is worthy of receiving your hard-earned cash as the weekend arrives. They could be anywhere in SA (but yes, I live in Cape Town so content will be somewhat biased towards the Mother City); some will be brand new while others will be well-researched old favourites.

To kick off the series, we’re going to go with the new – the newest brewery in Cape Town, in fact. Local Brewery & Co. launched with little fanfare in October 2021. The opening was about a year behind schedule due to some hardware issues, a sprinkling of red tape and this pandemic thing you’ve probably heard about. But at last, Cape Town has a new brewery to add to the directory.

Local Brewery & Co. is run by biochemist Euan Johnstone and digital strategist Lee Geldenhuys , who have created a very cool space to enjoy a little malted refreshment at the end of the working week. The bar – and I say this without ever having whipped out a tape measure and with no real evidence at all to back it up – is the longest of any craft brewery in SA, and it just begs to be sat at, creating that cheery locals vibe where strangers chat while propping up the hefty granite-topped bar. One thing I am very confident in saying is that Local Brewery & Co. is the first microbrewery in SA to be using the Bottoms Up system. The special glassware is filled from the bottom – a party trick that inspires just about everyone to take a quick vid (see below) and that will guarantee plenty of Instagram and TikTok love. Even more TikTok-worthy though, will be the videos that follow a few pints later, when people discover that the little disk in the bottom of the glass pops out when pushed, causing the liquid within to cascade down the pants of the pint-holder…

Friday beers. It has to be one of my favourite rituals in life.

Local’s flagship beer is a very quaffable pale lager, but it’s not their only brew. The young brewery is still experimenting so you’ll find small batches on rotation while they find out what works – in recent weeks, the taps (or whatever you call things underneath the bar that push beer up into the glass) have poured dunkelweiss, Berliner weisse, IPA, APA and sweet stout among others. Oh, and it’s all truly well-priced at just R25 a pint.

Local Brewery & Co. is a friendly place where the owners pour the beers and the locals quickly get to know each other’s names. As yet there’s no food available, so bring snacks or eat before you arrive. The brewery is currently open on Fridays from 3pm and on Saturdays from 1pm. It’s in a slightly dodgy corner of Woodstock so you might want to Uber, but then you should be Ubering anyway with beer prices this reasonable. As well as Friday Beers (and their less famous counterpart, Saturday Beers), Local is open for team-building, contract brewing and custom brewing. I highly recommend you go and check them out, perhaps at the end of your next working week. You’ve earned it!

Ten years of blogging about beerHelp Kennel Brewery open their own taproom
Comments: 4