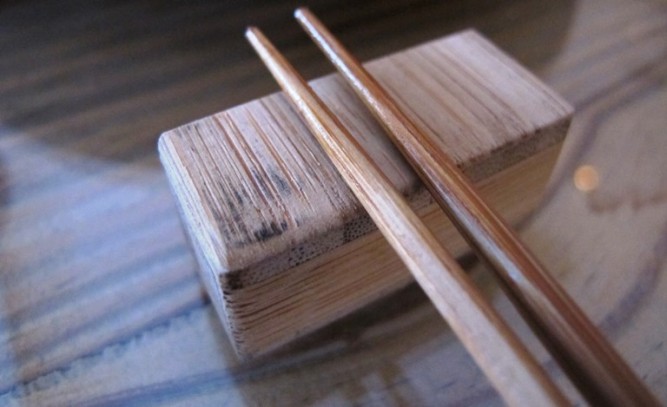 There is something very calming about Kyoto Garden Sushi. The muted colours, natural materials and low lighting combine to make this a particularly tranquil dining experience.  A visit to the loo can easily make you think you’re entering a spa and the whole place is kind of decked out how I’d love my house to look, if I didn’t have a toddler that would break the delicate lamps and get grubby pawprints over the beige furnishings. There are two separate dining rooms here, so even when it’s at capacity, you still feel like you’re eating in a small, intimate environment. It’s really rather lovely. 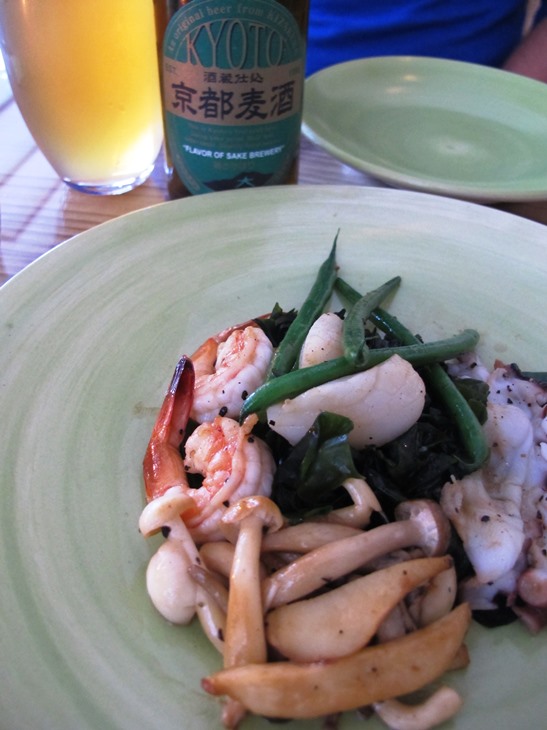 Kyoto Garden Sushi does a fine job of emphasising that there is more to Japanese food than just raw fish. Welcome snackies include baby clams, bamboo shoots and mustard cabbage, all of which provide quite the beer-pairing challenge. We then moved onto order a portion of Ecstasy. No, not that kind. The dish features perfectly sauteed octopus, scallops and prawns on a bed of pretty much the tastiest seaweed I’ve ever sampled. This isn’t as random a statement as you might imagine – I lived in Korea for two years, so have eaten more seaweed than you might expect.

I’ve heard fine things about pretty much everything on Kyoto’s menu, but when it came to the main course, we decided to opt for sushi. On recommendation from the waiter, we ordered a “Chef’s Own Creation” – a platter featuring the usual selection of nigiri, sashimi and California rolls, all blissfully free of mayo or – god forbid – sweet chilli sauce. We also sampled two of Kyoto’s splurge dishes – Toro (a fatty tuna that melts in your mouth like the centre of a Lindt Lindor chocolate) and something I have wanted to sample for years: sea urchin. The Japanese delicacy lived up to its reputation and dare I say was worth R250 for two (admittedly large) portions. This might sound a little odd, but have you ever sucked the brains out of a (cooked) prawn head? A Chinese friend once proclaimed it to be her favourite food and since then, I make a habit of slurping the goop that no-one else wants from the discarded skulls. It’s by far the tastiest part of a prawn and for me, sea urchin was a richer, tastier better version of prawn heads. And if that sounds gross, I’ve done a poor job of explaining myself, because it’s decadent and you should try it (sea urchin and prawn-brain-slurping).

As you’d expect, the staff at Kyoto are very familiar with their menu, used to explaining the more unusual and intricate dishes to the bewildered diner. We felt very comfortable largely leaving the ordering in our waiter’s hands – he’s surely more of an expert on Japanese cuisine than I am and made some solid recommendations. But what of the beer knowledge? The Japanese craft beers that we’d come to sample were not on the menu but on asking he knew exactly what we were after and brought out the first of three imported Japanese beers. Was he completely on top of explaining the beers? No, but if you read the labels, you’d understand why. If you’re not fluent in Japanese, information is somewhat limited to wonderful sentences like: “Without put in the refrigerator, it will make a big noise when you open a cap”. 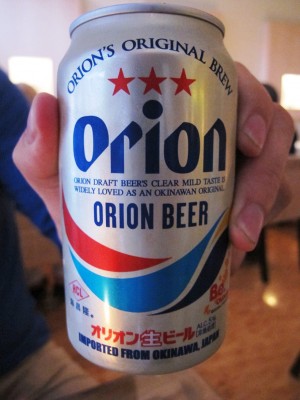 There are no South African craft beers available at Kyoto Garden Sushi. There are also no mainstream South African beers. Everything here has been imported from Japan especially for the restaurant, meaning that these beers are available virtually nowhere else in the country. Let’s start with the mainstream lagers: You’ve probably heard of Sapporo, Japan’s oldest brewery. Their lager is here, alongside similar offerings from Kirin, Suntory and one I’d never heard of – Orion (which has an awesome 1970s-esque can). They’re all light and delicate and thus pair fairly well with sushi. But while we ordered a couple to taste, these were not the beers we can come here to sample.

Owner Scott Wood hails from the States, but fell in love with South Africa in 2005. On noticing a lack of quality sushi joints – and an abundance of Chinese sushi chefs – he opened Kyoto in 2007, with fine, imported ingredients and a fine, imported sushi master. He has since started importing some fine beers, notably the trio from Kizakura Brewery in Kyoto. The three beers boast plenty of flavour, a little bit of quirk and a whole lot of clean. They are the sushi of the beer world – read all about them here.

It’s definitely a special occasion restaurant, but then what better excuse do you need for a splurge dinner than the opportunity to sample some beers you can’t get your hands – or mouths – on anywhere else. The food at Kyoto Garden Sushi is sublime, the service is friendly and professional, the decor is serene and the drinks selection offers something extra special for the beer (or sake, or whisky, or wine) lover. Order something you’e never tried before, indulge in a little beer and sushi pairing and treat yourself. You know you deserve it.

Disclosure: I was invited for a complimentary meal at Kyoto Garden Sushi. If I had been paying, I would certainly have splurged on the sea urchin – though perhaps not the Toro as well. Of course, I would have bought all the beers anyway. I strive to keep all reviews impartial regardless of whether the establishment has invited me or not.